Back story: I’ve known since my late teens, and if I’m being honest probably even my mid teens, that I would eventually get a boob job. My chest has always been on the smaller side, obviously, and it has been an insecurity of mine since puberty.

Fast forward 13ish years and here I am, 31. I just finished nursing my third (and last) baby and decided to seriously start my search for finding my perfect doctor. Thankfully I’m in the boob job capital (aka: Dallas) and had my fair pick to choose from.

I started my search with the good old web, browsing before and after pics for hours! My thought process here was that a doctor would make sure that his/her best work was on display. Y’all, I don’t think I’ve willing allowed Jason to look at so many other women’s breast but his input was just as important to me, so we would spend multiple nights just scrolling away.

Once I hit my soon to be doctors site I just knew he was going to be the one to preform my surgery. His results and background was simply unbeatable. I immediately made an appointment and was when I met the doctor I had this overwhelming feeling of comfort just knowing he was the one. Everyone is different but I loved how upfront and honest he was about the results to expect. Giving me the pros and cons of an augmentation or an augmentation with lift. I left his office with so much information and even had his previous clients reach out to me to tell me about their experience which was comforting.

Once I had contemplated the right decisions for me, aka silicone vs saline and lift vs augmentation, I called and scheduled my surgery date along with my pre-op. The excitement filled me just having a date set. The week before my surgery I met the doctor again for my pre-op, I confirmed I wanted to proceed with just the augmentation minus the lift before I worried about recovery and mainly scaring at just 31. I also made my decision on silicone because it felt so much more natural than the saline. We never spoke about CC’s but instead talked about goals. I wanted any extra skin from nursing to be filled and didn’t want to leave the surgery room without a full D cup. Once I explained what I was looking for we talked about recovery and what to expect after surgery. I left with my prescriptions and instructions for before surgery.

The night before surgery was a whirlwind! We dropped the kiddos off at my moms house, and had a quick mini date night before heading home. I washed with the hibiclens and went to bed. Of course very little sleep actually occurred because I was filled to the brim with excitement.

Morning of I was a basket of nerves not because I was having second thoughts but because I was ready. We met with the doctor again before surgery for me to confirm my goals and for him to make his markings. I literally don’t think I stopped smiling until they finally put me under. 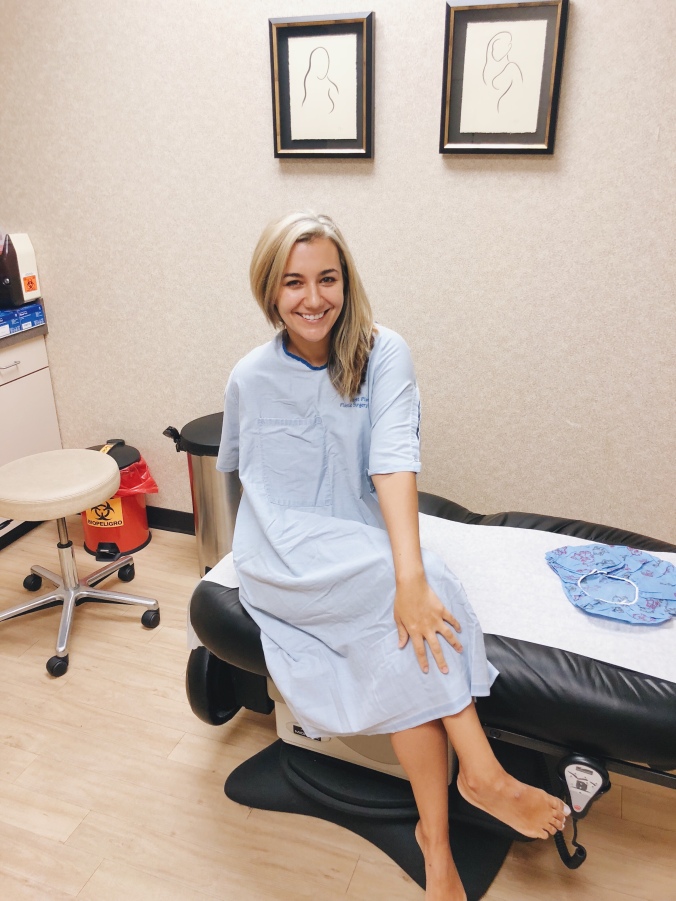 Waking up in the recovery room is a fog. I do remember being very uncomfortable. I was wheeled out to the car and the next thing I know I’m in my bed demanding more pain meds. Seriously, I admit I underestimated the level of pain. For whatever reason cutting into the muscle didn’t connect to a high pain level. Let’s just say I was extra thankful for good meds and a loving husband who helped me with anything and everything.

My doctor thankfully warned me, multiple times, that my breast would be high. The first 3 days were the hardest and I was def in shock after seeing my body look so different. Clarifying that I wasn’t doubting my decision but imagining seeing your body one way for 31 years and than suddenly there’s a drastic change. It can kinda be a mind f*ck no matter how long you’ve planned for it and that’s ok.

On the 5th day after surgery I had my post op. I had spoken to my doctor when he called me to check in on me in between but it was comforting to see him and have him confirm that surgery went perfectly and that things were looking good. He also mentioned that my chest muscles were extra strong and he had to make a lot of cuts to get the implants to settle how he would like, which explained my level of pain. At this point I had already weaned myself off of the pain meds and was strictly taking Tylenol 3 times a day. My movement and breathing were pretty much back to normal and every day got a little bit easier.

By week 2 I was feeling so much more like myself! Honestly it was hard for me to not do more around the house because I was feeling so good. This week I also felt comfortable enough to snuggle with my youngest , 18 months, which was a totally boost for my moral!

As I hit the week 3 mark I’ve learned to let my body rest when needed. Even though I feel better at times, when I do too much I can very clearly tell. I am however excited to start lower body exercises because I miss my me time.

I also have to give a HUGE shout out to my amazing husband, Jason, because this surgery would have been impossible without his support. He has been my rock through all this and the fact that he does his day job (he works from home) on top of being my hands with the kids just amazes me.